Tsoutsouras. Tsoutsouras, also called Tsoutsouros is a quiet little fishing village on the greek island of Crete, that has been built next to the ruins of the ancient city Inatos. The village is located about 65 kilometres from Heraklion, on the southern coast of Crete. The village is known for its delicious fresh fish served in the local tavernas. The houses are built along the coastline on the road along the beach. Most houses are new, but there are still some old traditional houses in the centre of the village. The residents of Tsoutsouras are welcoming and friendly to visitors to their village. There are a lot of small cafes and tavernas where one can sit on the terrace in the shade under the trees. There are apartments for rent and rooms in nice family hotels. Most are fairly new and are equipped with bathroom and kitchenette. Amenities like beach chairs and umbrellas and water sports are missing here, but perhaps that is precisely the charm of the small village. However, there is a shower on the beach so the salt and sand can be rinsed off. It has a small harbour for fishing boats.

Tsoutsouras in other languages


Heraklion Prefecture: Where on the map is Tsoutsouras located? 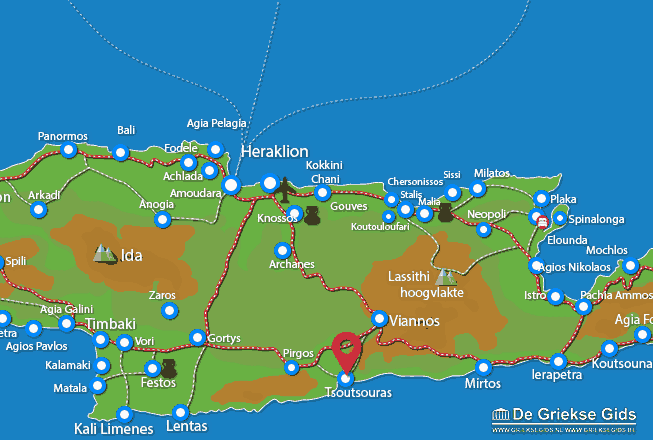