Aposelemis. Aposelemis is the name of a river, gorge and dam on the island of Crete. The river rises in the area near the village Kastamonitsa (21 kilometers south of Hersonissos). Rainwater from the mountains (the Lassithi mountains) flows into the river, so that the river widens and flows eventually between the area Anissaras - Gouves. The river flows partly through a walkable gorge that bears the name of the river. The gorge, which begins at an altitude of 120 meters near the village Xerokamares runs west of the village Agriana to the coast. The first part of the gorge is like a narrow valley, in the middle part the slopes are steep and high (200 meters) and near the village of Agriana are low hills. In the area where the river enters, there is a marsh that is important for migratory birds. The Aposelemis gorge is special because of its rich flora and fauna. Many sycamore and walnut trees grow here and all kinds of wildlife live here, such as hedgehogs, martens, wild pigeons and wild rabbits.

Dam of Aposelemis. The dam of Aposelemis is located south west of the village of Potamies. This dam was completed in 2012 to supply water to the northern coast between Heraklion and Agios Nikolaos. The dam has caused a commotion,in the past when the village Sfendili flooded and all residents had to leave their village. Sfendili has become a real attraction and is uninhabitable. Part of the village remains under water which gives a mysterious impression.. Sfendili today is accessible by a dirt road from the village Avdou.


Heraklion Prefecture: Where on the map is Aposelemis located? 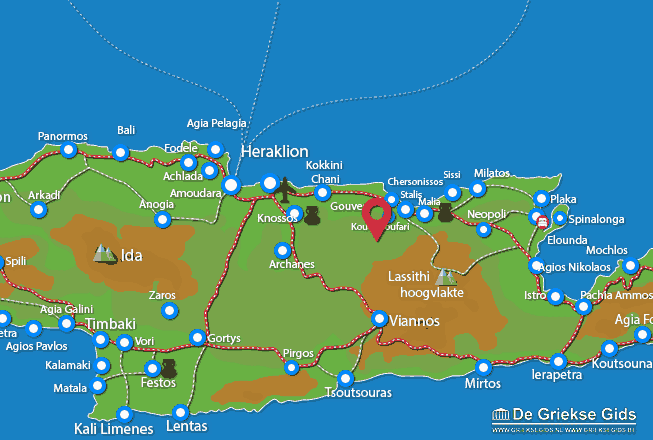