Zakynthos is located in the south of the Ionian Sea and is also called "Zante," a name given by the Romans and Venetians who centuries occupied the island. They also called the island, "Il Fioro di Levante," meaning "flower of the East." Levante is also the n ame ofthe wind that blows in summer from the east and which cools the places on the east coast.

Zakynthos is also the name of the son of Dardanus, king of Troy. He's the first who built the city on the island, according to the myth. Others claim that the name is derived from the flower, "Yakinthos," which is common in Zakynthos. According to Homer, the island belonged to the kingdom of Odysseus. Homer called the island "Iliessa," which means forest.

One of the main attractions of Zakynthos are the "Blue Caves." From Aghios Nikolaos, the most northeastern fishing town of Zakynthos, you can sail by boat to the Blue Caves. And literally, here you can take a dip in the blue water. Your skin tone turns blue during this dive, deep blue! This is, of course, an optical illusion and disappears when you come out of the water.

The Shipwreck of Zakynthos

The Shipwreck of Zakynthos, the wreck on Navagio Beach in the northwest of the island, is one of the most photographed spots in Greece. Of course, we too wanted to see this phenomenon up close. The freightliner ran aground during a storm in 1980. When you visit the shipwreck nowadays, you will discover that unfortunately, the boat is in very poor condition and covered with grafitti.

When you approach the beach from the mountains, you can take beautiful pictures of the beach and the wreck, there is a viewpoint about 250 meters above the water where you can take pictures. The sea is beautiful clear and turquoise in color. From here above, it is spectacular and breath-taking to see. That’s why this beach is so popular and printed on many cards and calendars. 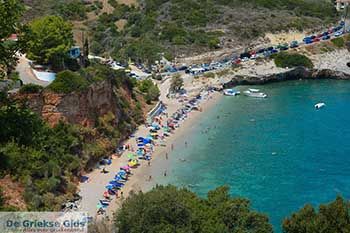 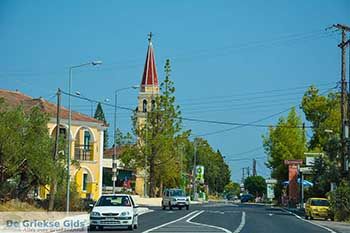 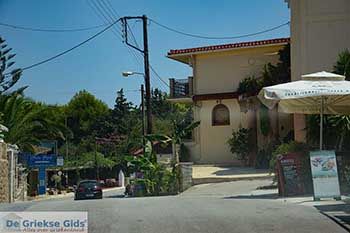 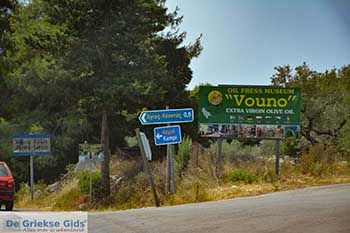 The beautiful beaches of Zakynthos

There are many beautiful beaches on Zakynthos. Which are the most popular?

Zakynthos town, is the capital of the island. The locals call the town "Chora," as often a capital is called on Greek islands. A severe earthquake nearly ruined the city in 1953. Now it is a modern town with many buildings in classical style. There are streets with arcades, churches with imposing bell towers, beautiful squares and major monuments. The port of island Zakynthos is also located in this town, from here there is direct connection to Peloponnese (Kylini).

The bay of Laganas is one of the most important ecological locations in the world, where the Caretta-Caretta turtles lay their eggs. I was very curious about this turtle and hoped to "watch" these impressive animals, but in a responsible way, where we were not intruding in their habitat. To accomplish this we boarded an ecological turtles trip, the "ECO Turtles excursion," offered by Nefis Travel in Agios Sostis.

The Dutch Jackie Boots-Gklavas of Nefis Travel, who for years has lived on Zakynthos with her â€‹â€‹Greek husband, organizes turtle-friendly trips and also gives the volunteers of the turtle protection organization an opportunity to raise awareness about these animals.

On board the boat, which is part of the Marine Park, we met volunteers from the Greek Archelon, the organization for the protection of this endangered species. The volunteers gave â€‹â€‹presentations about their important work in the "National Marine Park" on Zakynthos.

I was wondering if the promised turtles would really show up today. What makes the Loggerhead Turtles so special? The size of the Caretta-Caretta is impressive, they are as an adult, one meter (about 3 feet) long. The turtles lived in the Mediterranean long before the prehistoric times. Sixty percent of these turtles are born in Greece, and of those 40 percent are born on Zakynthos.

Every summer, from mid-May to late August, hundreds of female turtles come to lay their eggs. The weird thing about the story is that all these females come back to where they were born about 26 years earlier, to lay the eggs! That's something that we as humans, cannot understand.  How do they know so exactly where they were born, because they swim all over the world. Each female turtle returns one night and lays about 120 eggs.

The turtles bury their eggs in the sand where they lie for 60 days, under the warmth of the sun before they hatch. The mother turtle does not interfere more with the eggs, but is recovering from the heavy task and, gathers energy enough to lay another batch, once more, a few weeks later.

After 60 days, the small turtles come out from their eggs, they crawl to the sea to embark on the great adventure of life. These little turtles are now on their own to survive. They have to crawl to the sea themselves. This is crucial, and they train so their muscles and lungs can sustaon them.

Some think of helping by carrying the turtle to the sea, however it doesn’t help at all, in contrary, this causes the little ones to die earlier.

When the turtles are very young, they cannot see well but they have their own "navigation" system in order to reach the sea. They go towards the light that is reflected from the moon and the stars in the sea. The natural enemy of the Caretta-Caretta is also, unfortunately, the human being with lighted cities and disco lights on beaches, which confuse the young turtles' efforts and so they can’t reach the sea.

Speed â€‹â€‹boats and fishing nets are unfortunately a cause of many deaths among the Caretta-Caretta turtles. Of the thousand of eggs hatched, there is only one turtle back after 26 years to lay eggs, most others are in their first three years of life not saved, because they are the most vulnerable, their shell is still not hardened.

Fortunately, more and more is done to protect these unique and beautiful animals.

Before we left, the first Caretta-Caretta presented itself already. It appeared to be a female, which is reflected in the small tail coming out from under the shell. A male has a longer tail.

The great lady showed her beautiful head and claimed loud enthusiasm of the passengers on the boat. Moments later, we spotted another adult turtle and admired its beauty.

All in all a fantastic opportunity and an absolute must to experience the VIP ECO turtle-spotting trip of Nefis Travel Zakynthos!

Zakynthos in other languages


Zakynthos: Where on the map is Zakynthos located? 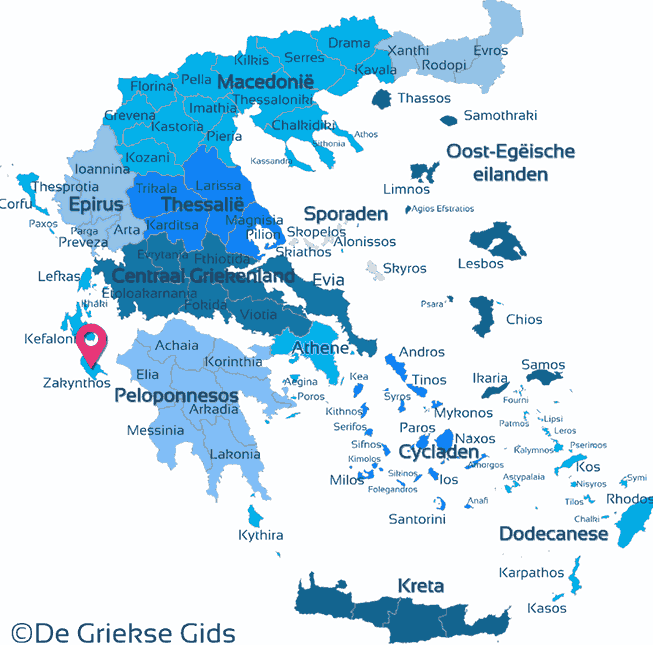 The map of Zakynthos - ©GreeceGuide.co.uk