Thrace is a region in North-eastern Greece.Thrace consists of the prefectures: Xanthi, Rodopi and Evros.Thrace is just like the rest of Greece characterised by rocky soils and mountainous areas with fertile valleys.

The ancient historical area of region Thrace is now part of Greece, Bulgaria and Turkey.Since 4000 BC there was the Thracian kingdom.The area stretched from the Caucasus to southwestern Europe.The Thracian empire at that time, was of great strategic importance and had many rulers.In Greek and Roman times Thracians were known for their martial spirit and their relatively highly developed skills in music and poetry. The influence of the Thracians in the early Greek society is evident from taking over their god of war, Ares.

The first Greek colonies on the Thracian coast, including Byzantium and Apollonia, are dating from circa 6th century BC.The area was largely under Persian rule.The Romans split the area in the province of Macedonia and the Kingdom of Pergamum, which was made under Claudius to a province of Thrace (46 AC.).

Since the 1st century, the area faced Gothic and Slavic looting and settlers.Then it was part of the Byzantine Empire.The fragmentation of the area began with the establishment of the Bulgarian Empire in the seventh century.In 1453 the entire area was gradually fallen under Turkish rule (the Ottoman Empire). In the 19th and 20th century Thrace was the scene of the Russo-Turkish Wars (1828-1829, 1877-1878) and the Balkan Wars (1912-1913).

The interactive map of Thrace

The map of Thrace 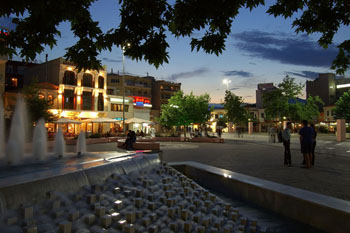 Thrace in other languages


Thrace: Where on the map is Thrace located?

The map of Thrace (©GreeceGuide.co.uk)