Naoussa. Naoussa is a cozy fishing village on a bay, ten kilometers (6 mi) northwest of Parikia on the Greek island of Paros. It has 2,500 inhabitants. Naoussa has everything a tourist expects from a typical Cycladic village; beautiful white houses, narrow streets, lovely seafood restaurants, cafes, nice shops and spectacular beaches. There are remains of a Venetian castle at the port of Naoussa. Close by are mills that characterize the image of Naoussa. Here, too, are several historic churches from the Middle Ages and museums, all worth visiting. Anyone who loves nightlife will like the many pubs and bars. In Naoussa you will find several large and small hotels as well as many private rooms for rent. The most popular beaches in the village are Monastiri and Kolimbithres where all sorts of water sports facilities are available and there is even a campsite. Other beaches in the vicinity of the village are Mikro and Megalo Piperi, Limnes, Santa Maria (where there is also a camp site) Ampelas, Fimismeni and Xifara.

In the month of July, wine and seafood parties are held in Naoussa. These celebrations are always accompanied by traditional music and dance. Other festivals are the August 29th feast of Aghios Ioannis and the August 23rd pirate parties.

Film about Naoussa on Paros - ©JustGreece.com

Naoussa in other languages


Paros: Where on the map is Naoussa located? 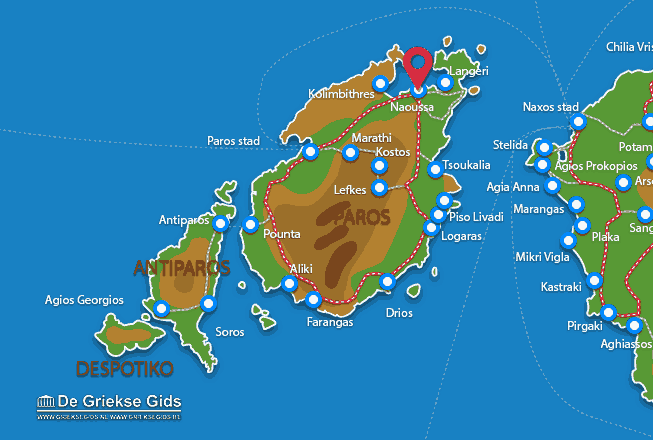