IDA MOUNTAIN CRETE. Ida, also called Psiloritis, is the mountain located centrally on Crete. The major part is located in the department of Rethymnon. According to mythology, the Ida Mountains (Cave Idaion Antron) were the birthplace of Zeus. The Ida Mountain is extensive and impressive and can be seen from almost everywhere in Crete. During the winter and until late spring the peaks of Ida are covered with snow. Ida/Psiloritis has with its 2456 meters the highest peak in Crete. Ida/Psiloritis is three meters higher than the summit of Pachnes, a mountain in the White Mountains (Chania Prefecture). From Anogia a beautiful road begins in the Ida Mountains. At the end of this road lies the Ida plateau. An incredibly beautiful piece of nature. A green oasis in an otherwise rugged, rocky environment. Thanks to the melting snow in spring, a green meadow arises. Here you will see sheep graze. In many places there are old, round, stone "cottages". In earlier years, the shepherds made in these shacks sheep cheese and yogurt from milk. In the mountains around the Ida plateau is located the cave of Zeus. According to the legend, in this cave Zeus grew up, protected by the nymphs and fed by Amalthea. It is certainly a cave which appeals to the imagination.

Ida mountain in other languages


Heraklion Prefecture: Where on the map is Ida mountain located? 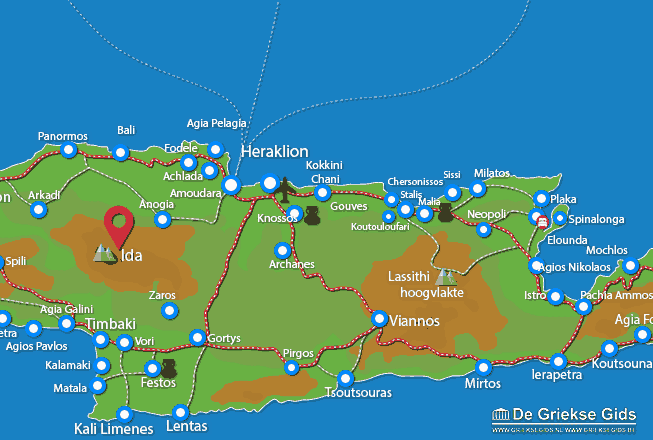