Epirus (Epirus) is the most mountainous region and one of the thirteen districts of Greece (surface 9450 sq. kilometers). Epirus got its name from "Apiros Gaia" which means the Infinite Earths. The Epirotans were, according to archaeologists one of the oldest well-organised Greek populations. Today, Epirus is aging because more and more young people are moving to cities or tourist areas. Known tourist places in Epirus are Parga, Sivota and Zagoria (Zagorochoria). Important for the economy is Igoumenitsa because of the port. Epirus is easily reached via Italy by boat. Epirus is located in the northwestern part of the Greek mainland. In 2001 the region had 353 820 inhabitants. Epirus is bordered to the west by the Ionian Sea, in the north by Albania, in the east by Thessaly and Western Macedonia and in the south by Central Greece.

The Ancient Epirotan population was in terms of culture and language related to the Macedonians and the Illyrians. They lived in open, unfortified villages and were always armed. Because the tribes were increasingly coming into contact with the urban culture of the Greek colonies on the coast, they became more and more influenced by Greek culture, language and the Greek way of life. Only in the Hellenistic era Epirotan tribes began to build fortified settlements in the classic Greek style.

The most famous Epirotan was their most ambitious king Pyrhus (318-272 BC.) The Molossians, an ancient Greek tribal state and kingdom that inhabited the region of Epirus since the Mycenaean era, practiced even a short period of sovereignty over Epirus.
After Pyrhus death Epirus became increasingly involved in the dispute between Macedonia and the emerging Rome. The Epirotans first supported the Macedonians against the Romans, exchanged in 198 BC. partner and in 180 BC. they started their own fighting against the Roman war machine. That decision was a big mistake, because when Rome in 168 BC. destroyed Perseus, the last Macedonian king, at Pydna, Epirus lost the war. According to the Greek historian Polybius, seventy Epirotan cities were destroyed and 150,000 people became slaves, and Epirus became part of the Roman province of Macedonia.

In the early Middle Ages Epirus suffered from numerous destructive invasions. After the Byzantine Empire in the 7th and 8th centuries was the administrative reorganised, Epirus was classified in the region Nikopolis. In the 11th century new invasions and new enemies appeared, the Normans and the Venetians. After the fall of Constantinople in 1204 Michaeli a member of the imperial family of the Angeli, established an anti-Latin stronghold in Epirus which became known in the Yearbook of history as the Despotate of Epirus.

At the beginning of the 14th century the Italian Orsini family, under a clever marriage policy, pursued in power, but this Latin tale was shattered in 1348 when the Serbs in Epirus emerged. Their power was short-lived because in 1386 the Serbian empire fell apart because of the rise of the Ottoman Empire. In 1788 Ali Pasha became the chief Ottoman governor of Epirus. A generation later the ruthless Pasha had risen to become ruler of South-Albania and a large part of Greece. Epirus was liberated during the first Balkan War in 1913 by the Greek army.

Today Epirus is aging, young people leave the mountain villages and move to cities or the flat coastal zone. Fewer and fewer young people want to stay farmers. Economic growth in coastal regions and in the valleys of Thesprotia, Arta and Preveza is very attractive to them. During recent years, ecotourism is promoted in the hope to offer more perspective to those who have not yet moved to the city.

The Kalamas Delta at Igoumenitsa is an important National Nature Reserve, which lies between the Vikos and Aoos river. It is since 1973 a protected area. The central area is 3412 hectares, 12 225 hectares of the surrounding area. Vikos and Aoos are located in the prefecture of Ioannina. The highest peak is Tympfi, almost 2500 meters high. The area is bisected by the valley of Vikos and the valley of Aoos. The Vikos valley is 1000 meters deep and is in the Guinness Book as the deepest valley in the world. Pindos since 1966 remains a protected area. Also living there are 50 rare brown bears. 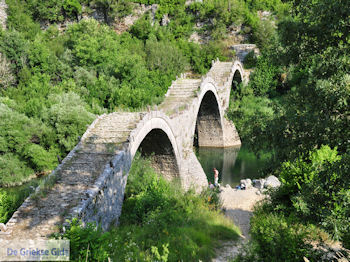 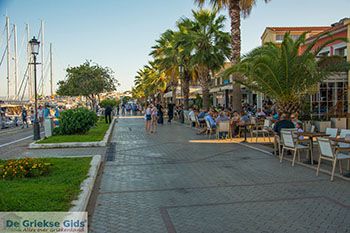 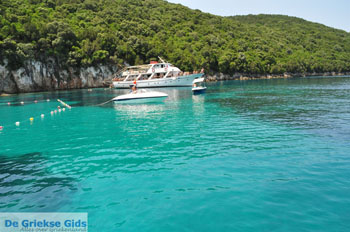 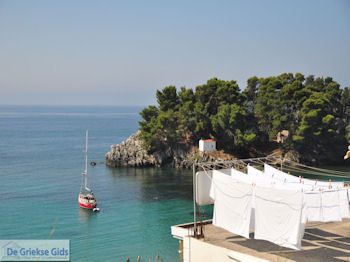 Epirus in other languages


Epirus: Where on the map is Epirus located? 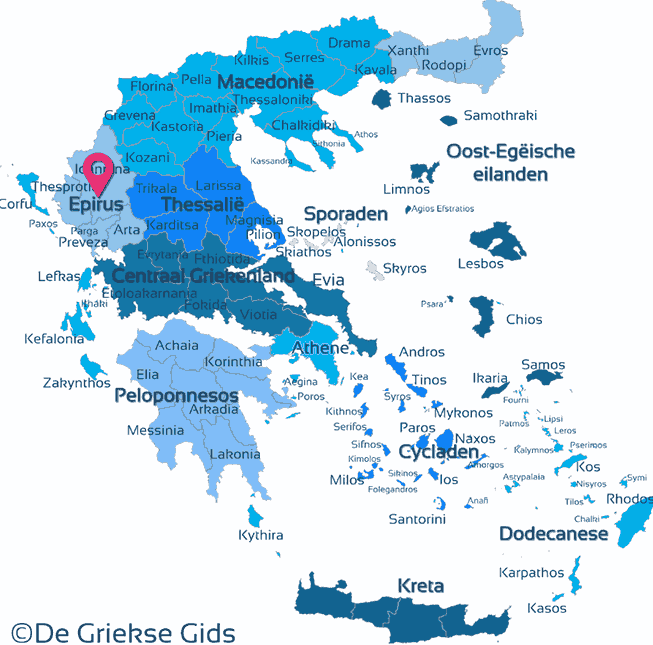 The map of Epirus (©GreeceGuide.co.uk)