Milos. Milos, also called Melos, a Cyclades island in the southwest of the Aegean Sea. It is the fifth largest island of the archipelago (151 km2/58mi2). It has a coast length of 120 kilometers (75 mi). Milos is best known for the statue of Aphrodite (Venus) that was found here and can be admired in the Louvre in Paris. Though Milos is more than the home of "Venus de Milo." Milos is a very special island due to the diverse geological nature. The island is of volcanic origin, which is clear to see during a visit to the island. Either by car, bus or boat you will discover amazing, impressive natural phenomena.

Boat trips around Milos are especially popular, and highly recommended! Discover the island in this excellent way – you easily explore places unreachable by car or on foot, and in a manner of speaking, you can see all the highlights of the island in one single day. There are boat trips that last from 9:00am to 7:00pm. The prices for these cruises start from € 30 for adults.

The island has three large villages. Those are Adamas (Adamantas), Milos and the mountain village of Plaka, which is also the capital of Milos. Adamas, the largest village, has the port of Milos. This is the arrival location for ferries from Piraeus (Athens) and other Cycladic islands, and also cruise ships that bring tourists to the island each day. In high season the area becomes crowded but remains very cozy.

All the way to the northeast you will find Pollonia, and possibly the most popular resorts after Adamas. Both Adamas and Pollonia have many nice restaurants, cafes, bars, shops and hotels. Plaka, the capital of Milos, is located three kilometers (2 mi) from Adamas on the slopes of a mountain. Plaka is located next to the village of Trypiti. As a result of modern construction, the two villages have grown together.

On Milos you’ll find some very quaint fishing villages with a fairytale appearance. The houses in these villages are hollowed in soft rocks, and sport brightly colored doors. In the last century, fishermen put their boats in these houses to protect them from the wind and waves. The houses consist of two floors - the boat was placed on the lower floor, and the top floor was used as the living room/bedroom of the fishermen. Usually, these were outside cottages the fisherman used for work. Nowadays, these houses are rented as apartments in the summer. These villages are Klima, Fyropotamos, Mandrakia and Mytakas.

There are many nice beaches on the island, some organized, others not. Several times daily, buses drive to some of these beaches from Adamas and Pollonia.
Some beaches are accessible only by boat.

How to Get to Milos

Milos is especially popular among island hoppers. Daily, in the summer, several boats connect Milos with Piraeus (near Athens). The boat from Piraeus stops at Kythnos, Serifos and Sifnos to then Milos. The duration of the cruise (with ordinary boat, not the fast boat) is about seven hours and a round trip boat ticket is available from € 72 (2014 prices). Milos is also reachable via other Cycladic islands such as Santorini.

Milos Airport is used only for domestic flights. A flight from Athens to Milos lasts about 25 minutes. 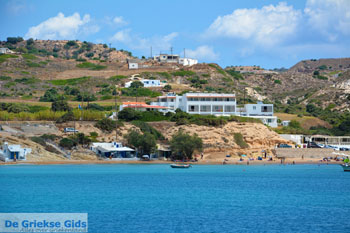 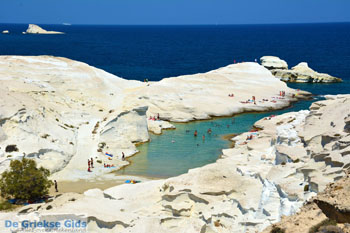 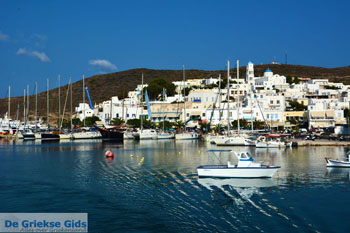 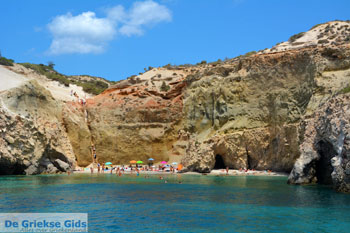 
Milos in other languages


Milos: Where on the map is Milos located?

The map of Milos - ©GreeceGuide.co.uk