SKOPELOS. Skopelos is a Greek island in the northwest of the Aegean Sea. It lies between the islands of Skiathos and Alonissos, not far from the coast of Pelion which is situated on mainland Greece. The capital of the island is Skopelos town. Skopelos island is about a 100 sq.km.the length of the coastline is 70 kilometres. The most striking aspect of this island are the approximately eight million pine trees that are present here. The tree which grows in abundance here, is a type of pine tree that easily multiplies itself, the seeds are dispersed by the wind and dense forests are created.

On the island are dozens of mountains 300 to 600 meters high. The highest mountain is Mount Delfi, which is 620 meters high. Skopelos has many beaches especially smaller ones, sandy and pebble. Some beaches are accessible by car, other beaches not, this has to do with the hilly, sometimes steep relief of the coastline.  If you sail with a boat around Skopelos, you will see many small beaches,often only reachable with a hired boat or on foot. The island is also known for its many hiking trails, many tourists who regularly come back to Skopelos, come just for walking and enjoying the beautiful nature.

Another phenomenon on Skopelos are the many churches and monasteries. It is estimated, there are three hundred eighty churches on the island.

Sights and tips on Skopelos

Skopelos has many beautiful sandy and pebble beaches. The best known beaches are those of Stafylos, Kastani, Milia, Hovolo at Klima Elios and Agnontas. Many beaches are not accessible by car, but on foot or by boat.

How to get on Skopelos

Skopelos has no airport and is only accessible by boat. Most tourists arrive from the island of Skiathos, in Skiathos is an international airport. A boat trip from Skiathos town to Skopelos town takes about one hour. Others fly to the city of Volos, from the port of Volos there is a ferry twice a day to Skopelos and the other Sporades. Skopelos is connected by ferry with the ports of Agios Konstantinos (Greek mainland), Volos, Skiathos, Alonissos and Skyros. 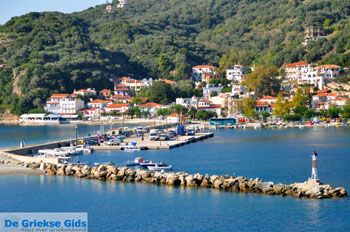 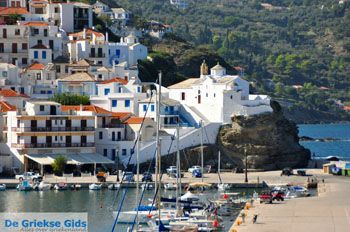 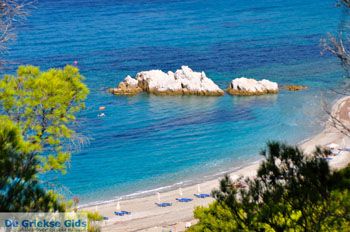 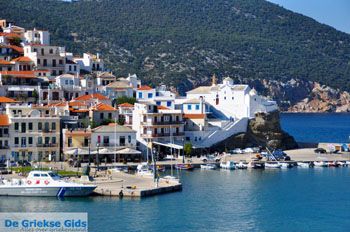 
Skopelos in other languages


Skopelos: Where on the map is Skopelos located?

The map of Skopelos - ©GreeceGuide.co.uk