Polygyros. Polygyros is the capital of the prefecture Halkidiki in Northern Greece. It is built amphitheatrically on the slopes and at the foot of the mountain Cholomontas. Polygyros is built at 550 meters (1800 ft) above sea level and is surrounded by lots of greenery and forests. It is a picturesque town, 69 kilometers (43 mi) from Thessaloniki. There is an archaeological museum with sculptures and vessels. There are also some traditional neighborhoods exhibiting characteristic Macedonian architecture.

Above Polygyros is an impressive hill, the famous Ai-Lias (Saint Ilias or Agios Ilias) with its like-named church. South of Polygyros there are low hills, gorges, ravines and the villages of Kalives and Gerakini.

The name "Polygyros" literally means "very old." Some attribute the name to the great climate, conducive to good health and old age. Others claim the name is derived from the words "Poly-Ieros" meaning "very holy.”

On May 17, 1821 the revolt against the Turks began in Halkidiki. After the Turks murdered the Greek governor of Polygyros, Kirkos Papageorgakis, the residents of the city defeated the Turkish guard and the Turkish soldiers were expelled from the city.

Polygyros in other languages


Halkidiki: Where on the map is Polygyros located? 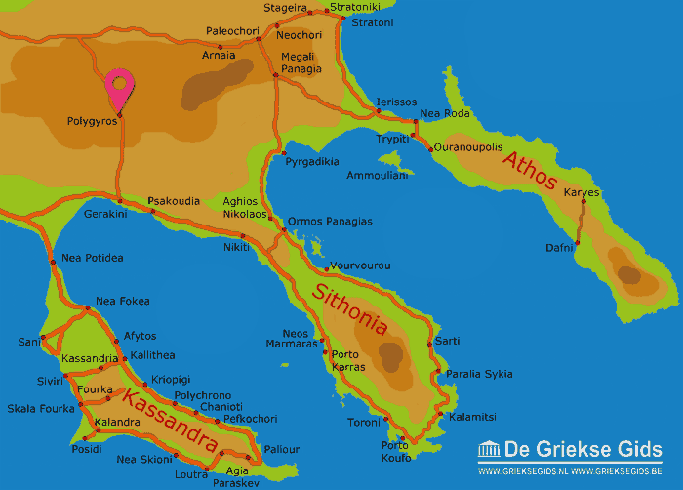