Sougia. Sougia is one of the most popular resorts in southern Crete. It is a picturesque village with a great beach. Sougia (150 inhabitants) is located 60 kilometers south of Chania town and is about half an hour by car from there. It is built on top of the ruins of the ancient Syia which belonged to the ancient Elyros. In the area of Sougia there are ruins of the Doric city of Lissos. This city has experienced its heyday during the Roman and Byzantine times. In Sougia you can see two beautiful little churches, the Church of the Holy Mother and the church of Agios Kyrikos. This village is accessible by sea, it has a nice harbour but is also accessible by car via the villages of Alikianos and Agia Irini. The harbour of Sougia is located west of the village, here you will encounter many fishing boats.

Sougia is a very nice village with some nice restaurants, cafes and bars. The beach is a pebble beach which consists of large dark gray stones. The sea water here is very clean. The port of Sougia is directly connected with Paleochora, Agia Roumeli (Samaria), Loutro, Chora Sfakion and the island of Gavdos. The ruins of Ancient Elyros are located 10 kilometers north of the village near the town Rodovani. Ancient Elyros was an independent town with its own coins. The old Lissos was a center where hydrotherapy was practised, ruins have been found in the fields surrounding the buildings and theaters. In the area around Sougia there are also several historic churches dating from 13th century to 16th century. It is worth visiting the surrounding villages like Prodromi, Rodovani, Maza and Dad Diana but also the beaches and Domata Fournoti.


Chania Prefecture: Where on the map is Sougia located? 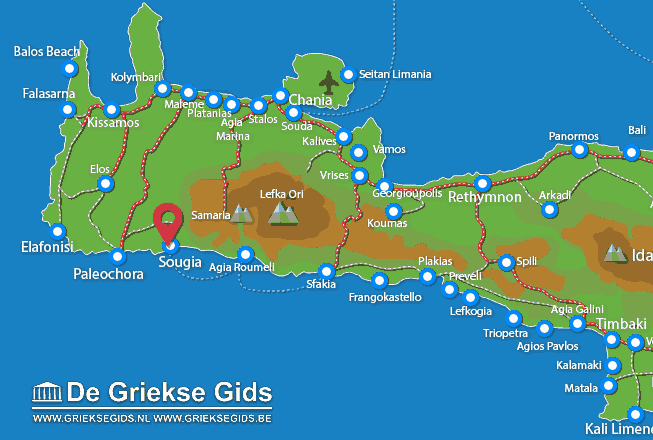