Mournies. Mournies is a beautiful traditional town on Crete, in the middle of a green area full of plane trees and water springs. It is located here since the Byzantine era. There live around 6500 inhabitants here. ``Mouria‘’ means mulberry in Greek, because there are many mulberry trees, the people gave this name to their village. Many prominent people have lived here over the centuries, Mournies was always a well-off village. Mournies is especially wellknown because, it is the birthplace of Eleftherios Venizelos, the main Greek statesman of the early 20th century. It lies four kilometers south of Chania city, it is said that here the best bread in Crete is available. When you are in Mournies visit the monastery of Chrisopigi that was built in the 16th century on the site of an older church. Here are icons from the 15th, 16th and 17th centuries.

Mournies is located near the monastery Sarakina which is very similar to a monastery on the Holy Mount. In Mournies you will find the monastery of Profitis Ilias, where Eleftherios Venizelos was baptized, and you can visit the house of Eleftherios Venizelos,which has been transformed into a museum where personal belongings of the Greek leader can be seen. Mournies is now seen as part of Chania city. It has more of a city style than a village style, there are many shops, clothing stores, cafes and restaurants. Mournies belongs to the municipality `Elleftherios Venizelos` which has a total of more than 10,000 inhabitants. The area is semi-hilly and from many places there is a beautiful view over the north coast and the Bay of Souda.


Chania Prefecture: Where on the map is Mournies located? 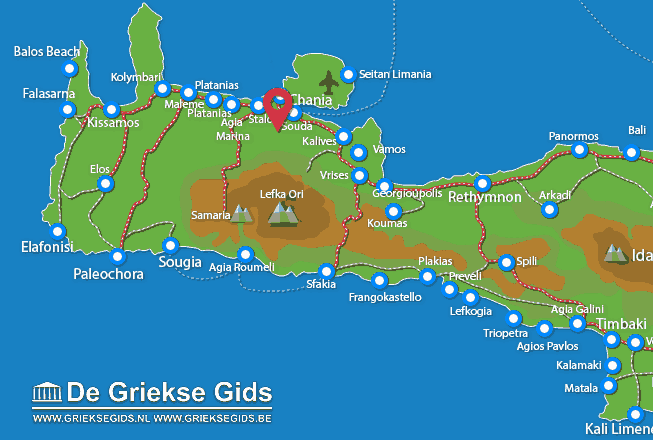