Vonitsa. Vonitsa is a nice town on the Greek mainland, in the department of Etoloakarnania. It lies on the southern coast of the Gulf of Amvrakikos, 10 kilometers east of Aktion, the international airport of Preveza (Parga) and Lefkas. In other words, from Vonitsa you are within 20 minutes in Lefkas town and Preveza town. Within 60 minutes you are in Parga.

Vonitsa is very cozy and is considered by many as the gateway to the Amvrakikos bay. In the town, near the water, are many nice restaurants and cafes. There is a nice harbor where fishing boats and sailing boats moor. To the east of the town is the sand-pebble beach where parasols have been placed on the beach. The area where Vonitsa is located is an area that has something of Lake Garda in Italy. A lot of greenery, mountains and hills around it.

In Vonitsa, founded by Corinthians in the 7th century BC, there is a beautiful fortress. The original name of the town was 'Anaktorio'. On one side of the fort is the town, on the other side there is a forest. The castle was built by the Venetians on top of the ruins of an older castle from Byzantine times.

To the east of the town lies the island of Koukouvitsa. You can walk to this island because there is a stone bridge built to walk to the island. In the summer months concerts and theater performances are given here.

Vonitsa in other languages


Aetoloakarnania: Where on the map is Vonitsa located? 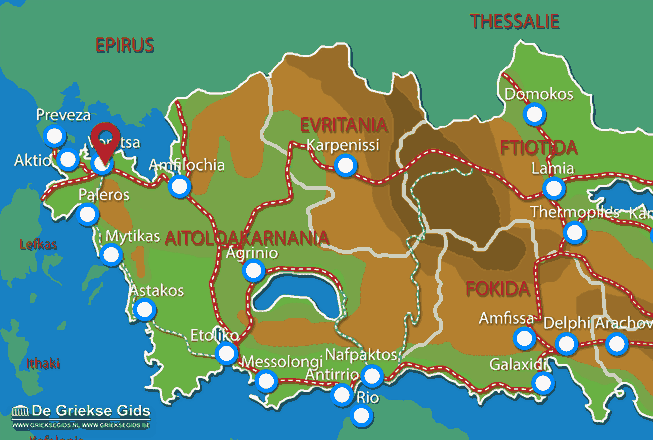