Astakos. Astakos, literally means 'lobster', is a coastal town in the west of the department of Aetoloakarnania. It lies in a deep bay, on the slopes of Mount Veloutsa, next to a fertile plain, 85 km from the town of Preveza and 58 km from the town of Agrinio. It is a lively town with a port. There are nice taverns and cafes at the harbor. Boats leave from the harbor to Ithaki and Kefalonia. Next to the harbor is the beach of Astakos. The inhabitants of the town are engaged in fishing and agriculture. Good wines are also produced in this area.

Astakos is known for its maritime tradition and rich history, the area has been inhabited since ancient times. In the northwest of Astakos is the ancient town in the area of Kasta Gavras where the Acropolis and the temple of Zeus Karaos can be seen, dating from the 4th century BC. Nearby is also the medieval castle of Dragamestos. An important attraction in the town are the many beautiful traditional mansions. The Agrabelou ethnological museum is also very interesting.

At the beginning of the bay lie the Echinades islands. Here in 1571 the naval battle of Nafpaktos (Battle of Lepanto) took place. That sounds actually illogical because Nafpaktos is 98 km away. At that time, the whole bay, now called the Gulf of Patras, was called the Bay of Lepanto. Lepanto was then the name of the current Nafpaktos. 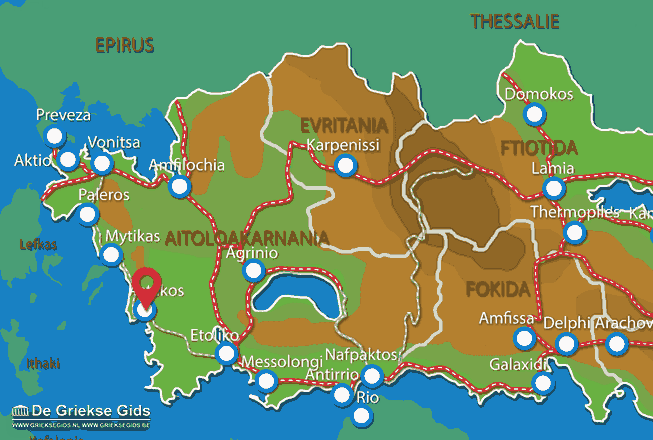