In the southwest Arta borders to the bay of Amvrakikos. This area is one of the most important habitats of Europe, protected by the Ramsar Convention (which protects wetlands and associated plant and animal species).

Prefecture of Arta is full of beautiful mountains and fertile valleys and plains. Capital of the prefecture is the town of Arta, which is built on seven hills on the banks of the river Arachtos.

Arta city is a storied town that is known for its famous bridge. It is a bustling town with lots of entertainment options. Arta city located 370 kilometers (230 mi) from Athens and can be reached fastest, via the Rio-Antirio Bridge and the Peloponnese.

Arta was founded by Corinthians in the 7th century BC. At that time the region was called Amvrakia. The name "Arta," was given during the Byzantine era. During the Turkish occupation from 1449 to 1881, Arta was an important trading center. Arta is known for an historic bridge. According to a legend, the bridge was built in the daytime and each night it collapsed, night after night. It was thought that a curse caused this nightly destrtuction, and that a human sacrifice was necessary to complete the bridge. The first technician finally sacrificed his beloved to finish the bridge. Although Arta has a long history, there is little left from ancient times. The main monument from this period is the ancient theatre of Amvrakia. Unlike the ancient times, there is much preserved from the Byzantine period, including many historic churches that can be admired today. 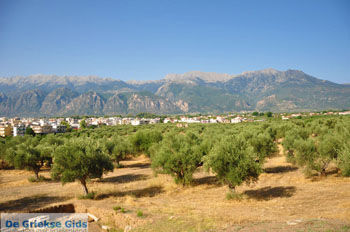 
Arta in other languages


Arta: Where on the map is Arta located?

The map of Arta - ©GreeceGuide.co.uk