Volakas or Volax is a tiny village on the island of Tinos, 10 kilometers (6 mi) northwest of Chora, the capital of Tinos. This village is located in the interior of Tinos. It is best known for the round-shaped granite rocks that are located throughout the whole area. These rocks were formed from volcanic eruptions thousands of years ago, but according to Greek mythology, these are the stones that the Titans used against the Giants during their fights. The sight of these rocks is quite impressive and people made â€‹â€‹good use of this phenomenon, building homes into the rocks. The cottages look cute and a walk through the village is definitely a treat.

Volakas is situated 284 meters (930 ft) above sea level on a mountain plateau. Volakas is well known in Greece for the wicker baskets produced there. Wicker basket production began centuries ago and still thrives today. In the village are a number of taverns and shops and there is an outdoor theatre where summer performances are given.

In Volakas is a folk museum, with objects from everyday life in the 19th century on Tinos, and some pretty typical Cycladic churches. Twice a year festivals are held, on Holy Thursday and on the Nativity of Virgin Mary, September 8th.

Volakas in other languages


Tinos: Where on the map is Volakas located? 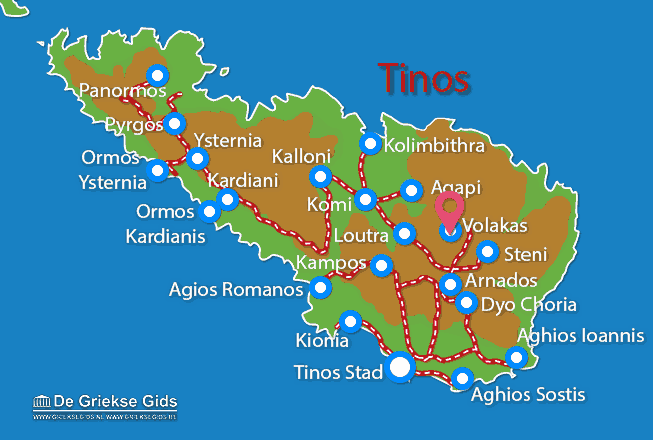