Agapi. Agapi is a traditional mountain village with white buildings, surrounded by green nature, 14 kilometers (8.5 mi) north of Tinos Town (Chora) on the beautiful island of Tinos, famous for its religious importance. In Agapi live about 200 inhabitants who are mostly Catholic. The village owes its name to Saint Agapitos (meaning love), who is the patron saint of Agapi. Every year on August the 18th, the feast day of Saint Agapitos is celebrated in the impressive white church. Picturesque cottages in the village are well cared for, as well as the narrow alleys with arches. Below the village is an alley that looks more like a tunnel. Here you’ll find a kafeneion, accessible only through the tunnel. From the balcony you have a mesmerizing view. Through the village runs a small river, hence the striking green vegetation in and around the village. In Agapi are several traditional cafés and a restaurant. Outside the village you’ll see the old water mill and many ornate dovecotes. The former primary school in the village, has turned into an exhibition center for photography exhibitions. Next to the church is an exhibition of local folk art and objects. The inhabitants of the village are mainly farmers, or sheep or cattle farmers.

To explore the village well we suggest you park on the outskirts of the village and then walk through it. You will not regret this. A few hundred meters (less than 1,000 feet) from the village Agapi is the tiny settlement of Sklavochori for you to explore. The famous Greek painter, Nikolaos Gizis, was born in Sklavochori (meaning slave village) in the year 1842.

Agapi in other languages


Tinos: Where on the map is Agapi located? 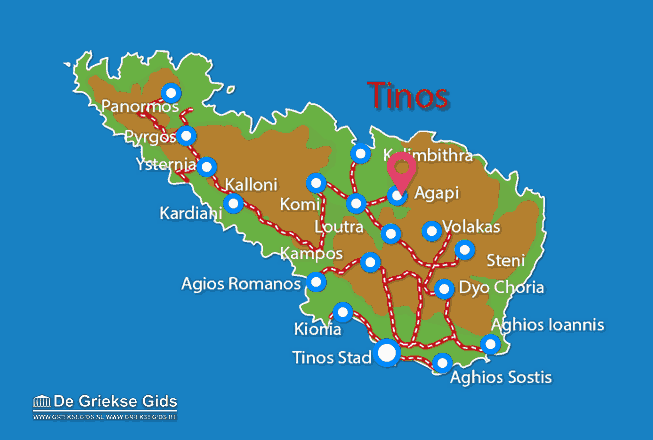