Vatera. Vatera is situated in the south of the Greek island of Lesbos, 58 kilometres west of Mytilene. It has an expanse of golden sand and clean sea which has been awarded with a “Blue Flag”.

Here it is still nice and quiet and not very touristy. One of the main villages in the area is Polichnitos, with its imposing mansions, neoclassical state buildings and the remarkable church of Agios Georgios. Skala Polichnitos has, together with the adjacent beach Nifida, developed into the tourist centre in the area.

Besides Polichnitos it is also worth visiting the pretty village with its collection of valuable palaeontological Vrissa finds that recently both here and in Lisvori and Vassilika were found.

In South Lesvos also are located traditional settlements in the fertile valley, the picturesque fishing harbour Dipi, Kato Trítos, Sikouda, Keremia and Ippeos, known for its figs. Here you will also find the villages of Asomatos and Agios Anagiros, a church surrounded by water and ancient trees and  beautiful nature.

Vatera in other languages


Lesbos: Where on the map is Vatera located? 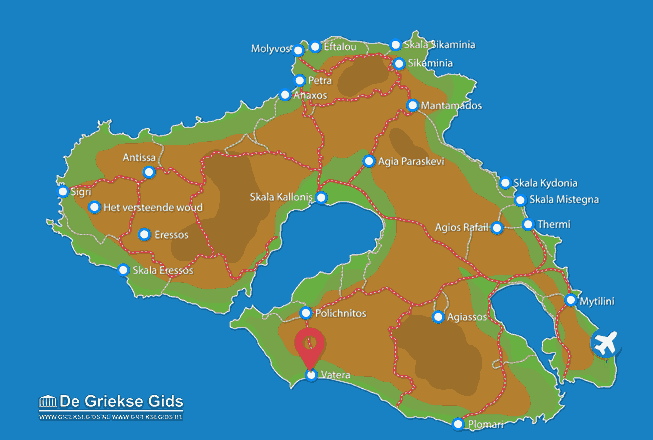