Steni Vala. Steni Vala, a picturesque fishing village on Alonissos that in recent years is very popular in tourism. It lies in a sheltered cove, which looks a bit like a fjord, about ten kilometers north east of Patitiri. The bay used to be a place where pirates hid their ships. Nowadays there are some very nice restaurants and cafeterias. There are also rooms to rent and there is a possibility for scuba diving. Steni Vala is very popular with sailors because the bay is very safe and the nature and the village are very beautiful. Opposite Steni Vala is the elongated island of Peristera. If you overlook the coast from Peristera the sea looks more like a lake. The Bay of Steni Vala is surrounded by low hills, pine forests and olive trees. Steni Vala is a small, narrow beach where you can swim. On this beach is the care house for the Monachus-Monachus seal. During our visit we saw how a three week old baby seal who lost his mother, was fed by the keepers of the MOM organisation. The MOM organisation does its best to protect the Mediterranean seal from becoming extinct. Another striking feature in Steni Vala is the supermarket "Ikion" which is also a cafeteria and more like a museum than  a shop. This remarkable supermarket is well worth a visit. Within walking distance, beyond the bay is the church and the beach of Agios Petros. This, admittedly small bay is very nice, the turquoise color of the sea, the green trees and the white rocks are a great colour combination. The beach of Agios Petros is a sand and pebble beach and with hanging trees over the sea.

Steni Vala in other languages


Alonissos: Where on the map is Steni Vala located? 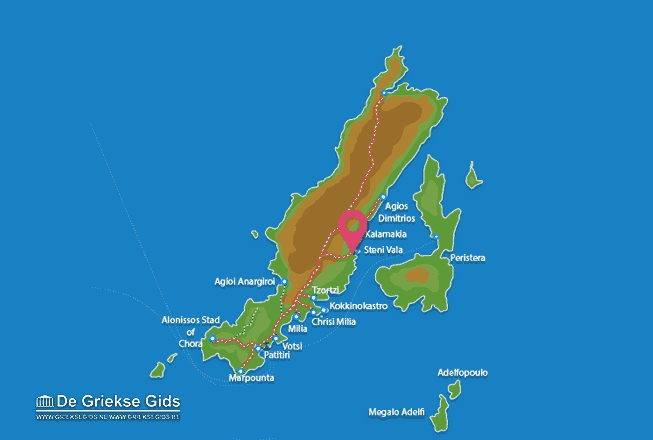