Xanthi town. Xanthi is the capital of the department of Xanthi in Thrace, Greece and employs approximately 45.000 people. This city is located in northern Greece, 200 kilometres east of Thessaloniki and 53 km from Kavala.

Xanthi, which was founded around the 9th century, is situated at the low slopes of the Rodopi Mountains. Next to the city flows the Kosinthos River. In the 13th and 14th centuries it was the main city in the region, then it was called Xantheia. Close to the city are to see the Byzantine ruins of the fort with rectangular and circular towers.

Xanthi was once a prosperous city but was destroyed in 1829 by an earthquake. The town was rebuilt and during the period 1870-1910 the city experienced an economic boom caused by the tobacco industry. A proof of this prosperity is well reflected in the old town, where the old tobacco warehouse is to see. They are beautiful mansions that are well preserved to this day.

Xanthi is a traditional city and part of the town has a protected cultural status. A visit in the city is pleasant because it is a vibrant city with a lot to see. Every Saturday there is a market and in the centre are many nice shops and terraces.

Xanthi town in other languages


Xanthi: Where on the map is Xanthi town located? 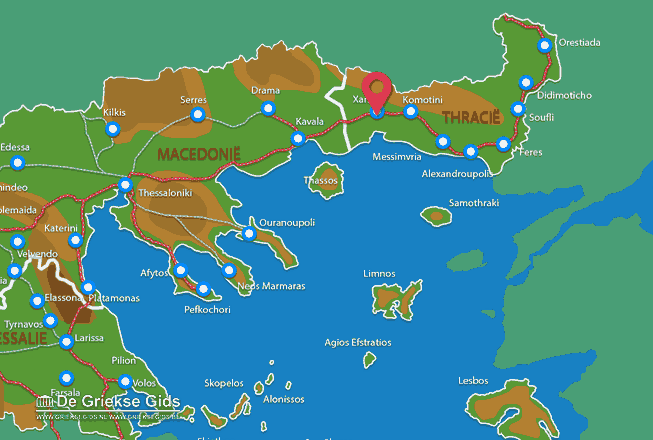 The map of Xanthi (©GreeceGuide.co.uk)