Xanthi. The prefecture of Xanthi is located in northern Greece, in the Greek district of Thrace. To the north it borders Bulgaria, in the west the prefectures Drama and Kavala, in the east the prefecture Rodopi, and in the south it reaches Aegean Sea.

The northern part of Rodopi is dominated by the Rodopi mountain range, the southern part which extends to the Aegean sea is flatter. This is called the plain of Xanthi. Main characteristic of the north are the woods and lush landscapes.

The largest river of Xanthi is Nestos who flows in from the prefecture Drama, and forms a kind of natural border between the prefectures Drama and Xanthi, it crosses the plain of Xanthi and finally flows into the Aegean Sea in the south of prefecture Kavala. Smaller rivers are the river Xanthi that passes through the town of Xanthi and the river Kompsatos. In the southeast is lake Vistonida located next to Porto Lagos. Porto Lagos is a picturesque fishing village situated on a piece of land that separates Lake Vistonida from the Aegean Sea.

The region has a rich history and a peaceful coexistence of Islamic and Greek elements and has been inhabited since ancient times. In Byzantine times the region experienced great prosperity. In its long history, tobacco production played an important role. Xanthi is the administrative and trade center of the region. 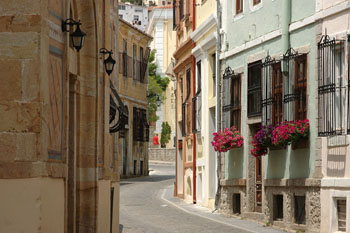 
Xanthi in other languages


Xanthi: Where on the map is Xanthi located?

The map of Xanthi - ©GreeceGuide.co.uk