Volissos. The village of Volissos on the Greek island of Chios is located northwest of Chios Town at thirty-four kilometres from the capital. It lies on the west coast of Chios on the slopes of a hill. The route from Chios is impressive. First, you see all kinds of rocky areas, then the route changes to forests. Volissos is a historic village and has about four hundred permanent residents. At the top of the hill stands the Byzantine castle of Velissarios. In the village you will see traditional houses, cobbled streets, bougainvillea’s and many other kinds of flowers. Most houses have small balconies.There aren’t many shops here and unfortunately the houses seem neglected, which in itself again seem charming. It is said that Homer was coming from here and lived here. Residents would be able to show his house...

A little further, two kilometres, is located the harbour Limnia where one can swim and soak up the sun on the sandy and pebble beach. From the harbour tourist boats sail to the island of Psara, located opposite. Main attractions in Volissos are the monastery of Agia Markella (patron saint of the island) and the Byzantine Mounton monastery from the 16th century. On the coast at Volissos are many deserted beaches that hardly any people discover.

Volissos in other languages


Chios: Where on the map is Volissos located? 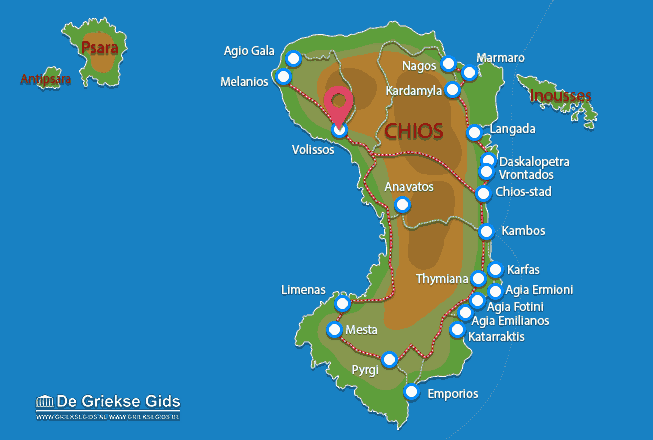