Ormos. Ormos is the name of a large bay south of Andros Town and at the same time it is the name of the fishing village that is located in this bay. It is called the Bay of Ormos or Ormos Korthiou and the village is also called Ormos Korthi. The village Ormos, which lies about 25 kilometers (15 mi) south of the capital, Chora, is a traditional fishing village with about 700 residents. The inhabitants of Ormos are mainly fishermen and farmers. In the land beyond Ormos are large fertile plains. The village itself has, like other villages on Andros, narrow alleys and manicured gardens. At the harbor of the village you can see fishing boats, yachts and tourist boats, as well as some taverns and cafes. At Ormos are several beaches. The most famous beach is the beach of Mylos, frequented mainly by wind surfers. Because of the winds, these beaches are ideal for this kind of sport. The most beautiful beach is located in the north of Ormos and is called Grias Pidima which means "the elderly woman's jump."

Ormos Korthiou in other languages


Andros: Where on the map is Ormos Korthiou located? 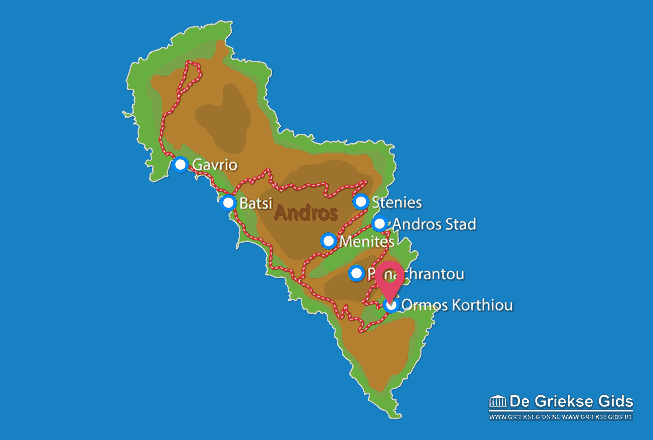 The map of Andros (©GreeceGuide.co.uk)