Korissia. The port of the island of Kea is located in Korissia, just 26 kilometers (16 mi) from the port of Lavrio (Attica). Ferries from Lavrio and the other Cycladic islands arrive here on a regular basis. It is the commercial center of the island. The locals call Korissia “Livadi” (meaning meadow). Korissia is built on the same site where Korissos was located in ancient times, at eight kilometers (5 mi) from the capital Ioulida (Chora). Ancient Korissia was built on two hills just behind the harbor. On the hill of Aghios Pavlos you can see the ruins of the Kato (Down) Acropolis and on the hill of Agia Triada you find the ruins of the Ano (Upper) Akropolis.

Many restaurants, cafes and tourist shops are located at the harbor. A walk through the narrow streets of the picturesque village is a must. You can swim at the main beach beside the harbor. There are also all kinds of water sports available.

In Korissia, at the Emagié factory, pots and pans and war materials such as helmets were fabricated during the period 1927-1957. The factory played an important role in the local economy during the last century. It is now a sort of museum, where various objects and machines are visible.

Korissia in other languages


Kea: Where on the map is Korissia located? 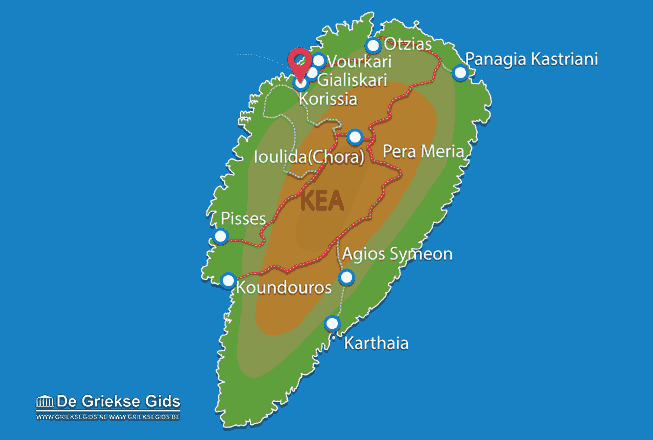