Kavirio. Kavirio (or Kaviria), the inhabitants of Lemnos call it Kaviria, is an archaeological site in the northeast of the island. It lies 41 kilometres from Myrina on the route Kontopouli-Panagia, after which you turn left for Panagia. The road is paved and runs until Kavirio. This settlement was discovered in 1937 by an Italian archaeological team.

Here was in antiquity the sanctuary of Kavirio which was protected by a long wall on the top of the hill and where religious ceremonies were held. The ceremonies that were held here are similar to the current baptisms. The ceremony had more to do with the birth or death. It suggests that everyone who participated in these mysteries, was given powers to avoid hazards and to defeat the enemies. Men, women and children took part on these ceremonies. Participants were given an olive wreath on their head and a red stripe on the abdomen so that they were protected from evil.

Just below, on the back side of Kavirio,  is the cave of Filoktitis, which is accessible via a stone staircase. To enter the cave, you can either swim through the large opening, or walk through a very narrow slit a few meters away. Before you enter through the narrow passage into the cave, take your shoes off because there is water up to your ankles!

Who was Filoktitis? This was a good friend of Jason and Herakles (Hercules). After the death of Heracles he inherited the bow and the poisoned arrows which Herakles used to beat the Lernea Hydra and for its 12 heroic deeds. Filoktitis later took part in the Trojan War. He was one of the best Greek archers, unfortunately he was bitten by a snake during the Trojan War, and had to move to Lemnos and remain in this cave of Kavirio to heal. For no less than 12 years Filoktitis has lived in this cave until Odysseus came to pick him up.


Lemnos: Where on the map is Kavirio located? 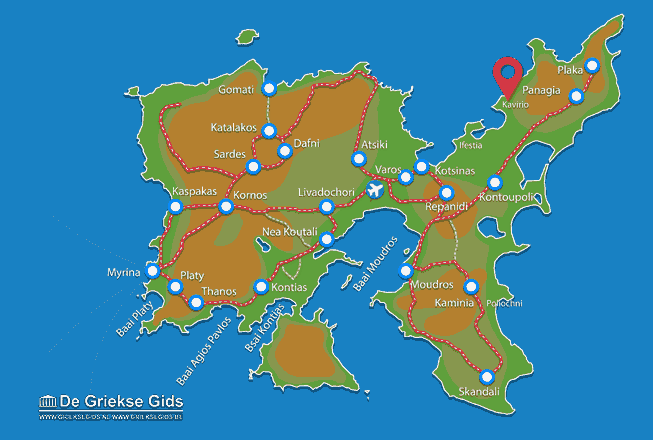