Ifestia. Ifestia is an archaeological site in north-eastern Lemnos, 38 kilometres from Myrina. On the route Kontopouli to Panagia a road sign indicates that you have to turn left, after which via a five kilometre long dirt road you reach Ifestia.

Ifestia or Hephaestia, was in ancient times one of two states on the island (period 7th to the 1st century BC). Here was the seat of the ancient Greek religion on the island. Protector of the state was the God Hephaestus (Ifestus). Hephaestus was born lame and his mother (Hera) because of shame, threw him from Olympus into the sea. There he was caught by Tethys and Eurynome and was taken to Lemnos, where he began his work.

The main monument here so far found is the theatre. The theatre has been restored and looks very beautiful. Furthermore, there are all kinds of weapons found, golden objects and vases. The found objects testify that there were trade relations between Lemnos and the other Aegean islands and Macedonia.

The coins found here, depict on the one side a lighted torch, proving that celebrations were held here to honour the God Hephaestus. The excavations made here, brought a necropolis, all kind of baths and a palace from the Hellenistic period to the light.


Lemnos: Where on the map is Ifestia located? 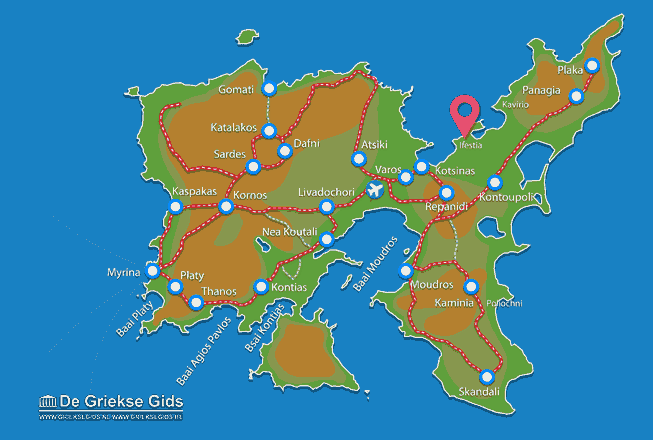