Kozani. The prefecture of Kozani is located in the western part of the Greek district of Macedonia. Three-quarters of the region is hilly or mountainous. The capital of the prefecture is Kozani town at 700 meters (2,300 ft) above sea level, surrounded by the mountain ranges Vermio, Bourino and Pieria. In Kozani town is home to the Koventareios Municipal Library, which is the second largest in Greece after Athens. No fewer than 153,000 books are kept here including 380 manuscripts and many rare editions. Very interesting are also the Ethnological Museum, the Natural History Museum and the Archaeological Museum, housed in a traditional townhouse.

A very nice town is Siatista, which lies on the slopes of Mount Siniatsiko at 920 meters (3,000 ft) altitude. This city is located in the western part of the prefecture, 30 kilometers (19 mi) west of Kozani town. From the 17th to the 19th century, Siatista was very prosperous, witnessed by the many mansions that are found in every corner of the town. Unfortunately, many are dilapidated because there is simply no money. Bureaucracy delays many good initiatives such as their renovations. A wine producer described this dilemma to us when we were in Siatista. In the town is also the main church of Agios Dimitrios, which was built in the year 1911. The oldest church though, is the church of Agia Paraskevi that was built in the year 1677 at the Gerania Square.

A very picturesque village is Velvendo in the east of the Kozani prefecture, situated on the slopes of the Pieria Mountains and east of the lake Polifitos. It is a nice looking village, with houses built in traditional Macedonian style architecture. Around the village are all kinds of fruit trees and from here you can make hikes in the Pieria Mountains to many picturesque mountain villages.

One of the most beautiful hikes in this area takes you to the waterfalls of Skepasmeno and the gorge of Velvento. One of the largest rivers in Greece, Aliakmonas, runs through the area. Here is one of the largest water reservoirs, that of Polifitos. The bridge over the reservoir is 1,372 meters (4,500 feet) long and 13.5 meters (44 ft) wide and is called the bridge of Servia, after the town south of the lake. The lake is ideal for many undertakings, including swimming, fishing and other sports activities and recreation.

Aiani: Aiani is a small town near the shores of Aliakmonas, about twenty kilometers (12 mi) south of Kozani town. Aiani is named after the ancient town of the same name. The archaeological excavations of that town are one and a half kilometers (1 mi) away. Founder of the city was Aianos, the son of King Elimos of Tirina. Nearby, stand the basilica of Agios Dimitrios from the 11th century and several Byzantine churches of the 16th century. 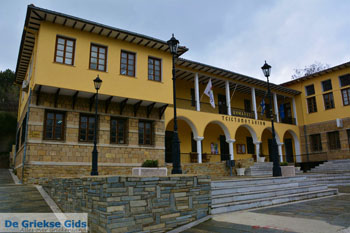 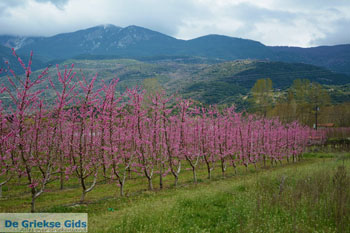 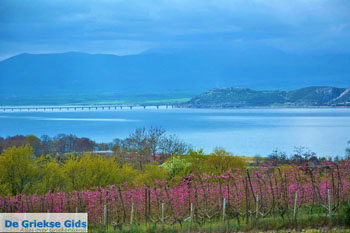 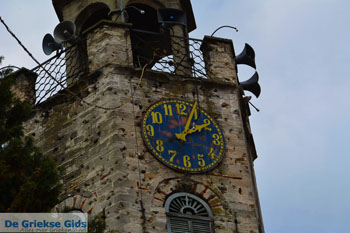 
Kozani in other languages


Kozani: Where on the map is Kozani located? 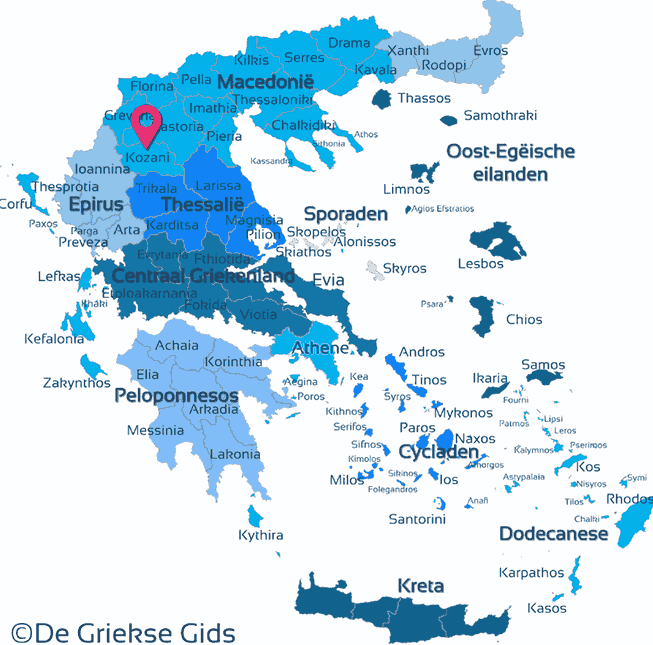 The map of Kozani - ©GreeceGuide.co.uk