Psathi. Psathi is a small tourist resort in the western part of Ios, 18 kilometers (11 mi) from Ios town. It is located in the Psathi bay, which is a nice, sandy beach. One can rent beach umbrellas and sun loungers here.

Like Agia Theodoti a little further north, Psathi is ideal for people who do not like too much fuss. In Psathi there is a long sandy beach and in the bay is also a smaller sandy beach. There are some hotels and taverns. In a rocky area, west of Psathi, are the ruins of the castle of Paleokastro built by the Byzantines in the Middle Ages. In the castle is the chapel of Panagia Paleokastritissa. It is impossible to come here by car, however there is a mountain path that runs from Agia Theodoti/Psathi to Paleokastro.


Ios: Where on the map is Psathi located? 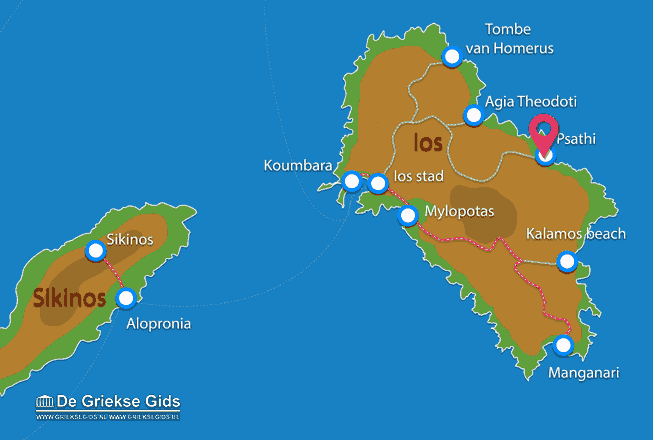 The map of Ios (©GreeceGuide.co.uk)