Kastoria. Kastoria is a prefecture in the west of the Greek region of Macedonia, bordering Albania in the west. The capital of the prefecture is Kastoria town. From Thessaloniki, via the Egnatia motorway, you get there in a half hour. The prefecture of Kastoria is breathtakingly beautiful. It is a mountainous region with high and low mountains, rivers and lakes.

The capital city of Kastoria is a real gem. It lies on the shores of the namesake lake which is also is called the Lake of Orestiada. The town is built on the edge of the lake and onto a peninsula that extends into the lake. The houses in the city are a mix of modern houses and traditional mansions. The houses on the peninsula are partly on the slopes of a mountain. Here you can see many Byzantine and post-Byzantine churches built during the Middle Ages.

Kastoria town, which lies about 700 meters (2,300 ft) above sea level, has about 15,000 inhabitants. The name Kastoria is derived from the word Castor, which means beaver. According to experts, many beavers inhabited the area in previous centuries.

In winter, the lake often freezes. Many lovely traditional and modern restaurants and cafeterias lie on the banks of the river, in the city. The neighborhoods of Doltso and Apozari are very cozy and quaint.

Around the lake and the peninsula is a road used by many cyclists and joggers. On the peninsula are the caves of the Dragon, several beautiful churches and the monastery of Panagia Mavriotissa. By car or on foot you can travel from the peninsula to the top of the hill.

From above, and especially from Agios Thanasis and Profitis Ilias you have an impressive view over the lake, the city and the entire region up to the mountains of Vitsi and Grammos.

Kastoria is well known in Greece for fur processing. In addition, many inhabitants of the region are farmers who export oranges, tangerines, lemons, apples, cucumbers and kiwis.

A very interesting place in the south of the lake of Kastoria is Dispilio. In 1932, the water level of the lake dropped and a prehistoric settlement was found. Since 1992, a systematic excavation has taken place and has revealed the remains of a late Neolithic era village. The houses of the village were round and were built of wood, straw and clay.

There are regular direct flight connections between Kastoria and Athens (Athens Airways and Sky Express).
There are also daily bus connections with surrounding towns and with Athens and Thessaloniki. 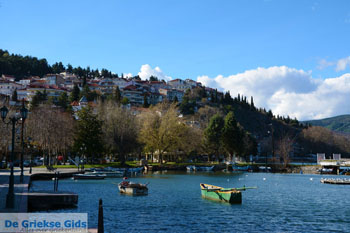 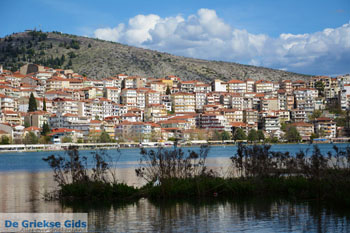 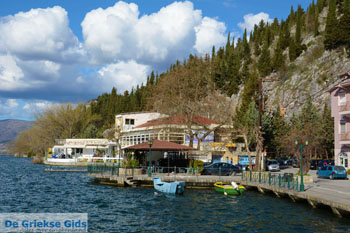 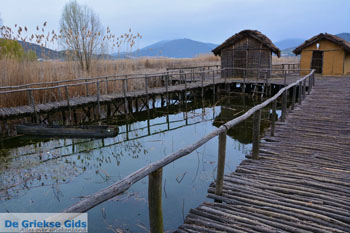 
Kastoria in other languages


Kastoria: Where on the map is Kastoria located?

The map of Kastoria - ©GreeceGuide.co.uk