Salamis (Salamina). Salamis is one of the Saronic islands. Salamina is located in a small bay opposite Pireaus, Elefsina, Megara and less than one mile from Perama. It is 95 km2 and the coastal length is 104 kilometers. The capital city of Salamis Salamis is also called Koulouri. Of all the Saronic Gulf islands (Salamina, Aegina, Poros, Hydra and Spetses) this is for many people from Athens the summer favourite because it is a short distance from the capital. Although in recent years the environment has changed due to heavy industry in the region and the natural beauty of the area has been affected. Salamina is the birthplace of the tragic poet Euripides and has marked its place in history with a famous battle in 480 v. (Greeks against the Persians). In Salamina, you can visit the Agora, and the ruins of the temple of Aias (Ajax). Also, you can find Byzantine influences in the convent of the Virgin Faneromeni and the beautiful frescoes in the church. The beautiful sandy beaches of Moulki, Kanakia and Peristeria will attract many people.

How is Salamis accessible?

Salamis is accessible via ferryboat. There are daily connections to Piraeus and especially to Perama (hamlet of Piraeus). (Smaller) ports Kaki Vigla, Peristeria, Ambelakia, Paloukia, Faneromeni and Selinia. 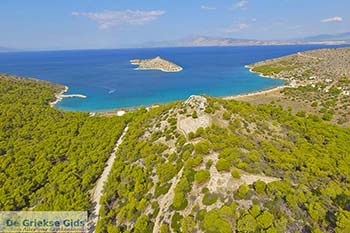 
Salamina in other languages


Salamina: Where on the map is Salamina located?

The map of Salamina - ©GreeceGuide.co.uk